What is a Binding Financial Agreement (BFA)?

A Binding Financial Agreement (or BFA) is a private agreement entered into by parties to a relationship to settle their property affairs. A BFA is essentially a contract that allows parties to avoid going to court, and can dictate how their property is to be dealt with, as well as what maintenance might be payable by one party to another.

A BFA can be entered into before, during or after the breakdown of a relationship. This applies to both marriages, and de facto relationships, both of which fall within the ambit of the Family Law Act 1975 (Cth).

While Consent Orders, or other Orders of the Court, are binding on the parties and almost impossible to set aside, BFAs do not have the same level of 'water-tightness'. A BFA could fail or cease to have effect in a number of circumstances – it may not be valid to begin with, it might be terminated or it could be set aside. The provisions that describe when an agreement is binding can be found in s 90G of the Act, and the circumstances in which a BFA may be set aside are contained in s 90K of the Act for a marriage, and s 90UM for de facto couples.

Is the financial agreement binding?

Not binding to begin with?

A BFA may fail simply because it was not validly created in the first place. There are strict form and legal requirements that must be adhered to so that a BFA is binding on the parties. Basically, these are that the agreement be in writing and signed by the parties, that each party obtains independent legal advice and that the legal practitioner signs a certificate stating that they gave that advice.

(a) the agreement is signed by all parties; and

(c) either before or after signing the agreement, each spouse party was provided with a signed statement by the legal practitioner stating that the advice referred to in paragraph (b) was provided to that party (whether or not the statement is annexed to the agreement); and 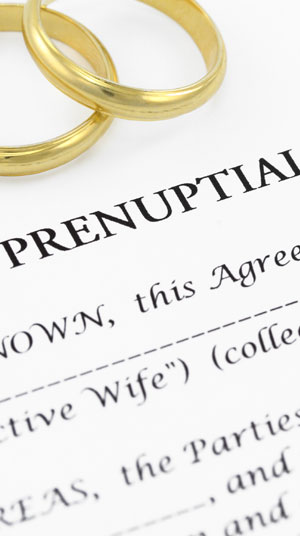 (1) The parties to a financial agreement may terminate the agreement only by:

(a) including a provision to that effect in another financial agreement as mentioned in subsection 90B(4), 90C(4) or 90D(4); or

(b) making a written agreement (a termination agreement ) to that effect.

Interestingly, a BFA does not necessarily cease to operate after a party's death. The BFA continues to operate through the Estate of the deceased party. The relevant provision of the Act is s 90H (titled 'effect of death of party to financial agreement') which states:

Setting Aside the binding financial agreement

Once a valid BFA has been found to exist, it can be set aside for a number of reasons. These grounds are set out in section 90K (married) or 90UM (de facto) of the Family Law Act. It can be set aside if the following are found to have occurred:

c. If the agreement is found to be void or unenforceable – in a contract law sense i.e. due to mistake, public policy, misrepresentation, duress, a breach of the agreement or unconscionable conduct.

d. If it is deemed to be impractical to carry out the BFA.

f. If there is an issue with superannuation, for example: the agreement provides for a superannuation interest that cannot be split.

g. If a Court in all the circumstances deems that it would be just and equitable to set the agreement aside.

The relevant provision of the Act is s 90K:

(1) A court may make an order setting aside a financial agreement or a termination agreement if, and only if, the court is satisfied that:

(a) the agreement was obtained by fraud (including non-disclosure of a material matter); or

(i) for the purpose, or for purposes that included the purpose, of defrauding or defeating a creditor or creditors of the party; or

(ii) with reckless disregard of the interests of a creditor or creditors of the party; or

(i) for the purpose, or for purposes that included the purpose, of defrauding another person who is a party to a de facto relationship with a spouse party; or

(iii) with reckless disregard of those interests of that other person; or

(b) the agreement is void, voidable or unenforceable; or

(d) since the making of the agreement, a material change in circumstances has occurred (being circumstances relating to the care, welfare and development of a child of the marriage) and, as a result of the change, the child or, if the applicant has caring responsibility for the child (as defined in subsection (2)), a party to the agreement will suffer hardship if the court does not set the agreement aside; or

(e) in respect of the making of a financial agreement--a party to the agreement engaged in conduct that was, in all the circumstances, unconscionable; or

(f) a payment flag is operating under Part VIIIB on a superannuation interest covered by the agreement and there is no reasonable likelihood that the operation of the flag will be terminated by a flag lifting agreement under that Part; or

(g) the agreement covers at least one superannuation interest that is an unsplittable interest for the purposes of Part VIIIB.

(1A) For the purposes of paragraph (1)(aa), creditor , in relation to a party to the agreement, includes a person who could reasonably have been foreseen by the party as being reasonably likely to become a creditor of the party.

(2) For the purposes of paragraph (1)(d), a person has caring responsibility for a child if:

(a) the person is a parent of the child with whom the child lives; or

(b) a parenting order provides that:

(i) the child is to live with the person; or

(ii) the person has parental responsibility for the child.

(3) A court may, on an application by a person who was a party to the financial agreement that has been set aside, or by any other interested person, make such order or orders (including an order for the transfer of property) as it considers just and equitable for the purpose of preserving or adjusting the rights of persons who were parties to that financial agreement and any other interested persons.

(4) An order under subsection (1) or (3) may, after the death of a party to the proceedings in which the order was made, be enforced on behalf of, or against, as the case may be, the estate of the deceased party.

In this recent case in the Federal Circuit Court of Australia (Brisbane), a Binding Financial Agreement was found to have been validly created, but was set aside for a number of reasons, most particularly that the agreement was obtained by fraud as the husband failed to disclose significant assets (real property in the United States). He was also found to have acted with illegitimate pressure, amounting to unconscionable conduct, in his dealings with his ex-wife.

159. The financial agreement between the parties is voidable at Mrs Adame’s election because of Mr Adame’s fraudulent misrepresentations. She has elected to have the agreement set aside. She is entitled to that relief.

160. She is also entitled to have the agreement set aside in Equity by reason of the illegitimate pressure that Mr Adame brought to bear upon her to sign the financial agreement.

162. I make the orders set out at the commencement of these reasons.

This case serves to demonstrate some of the difficulties that are associated with BFAs. While they are often an easy and cheap solution to settling your property affairs, when things go wrong you are not as protected as you may be had your agreement been formalised and sealed by the Court.

If you have signed up to a binding financial agreement that you are uncomfortable with, or you feel is unjust or unfair, Bainbridge Legal is able to help. We are experienced family lawyers with the knowledge required to assist you in these circumstances. Similarly, if you wish to enter into a binding financial agreement and want to ensure that it is valid and binding, we are able to help you. Contact us today for a consultation with one of our experienced practitioners.
read more